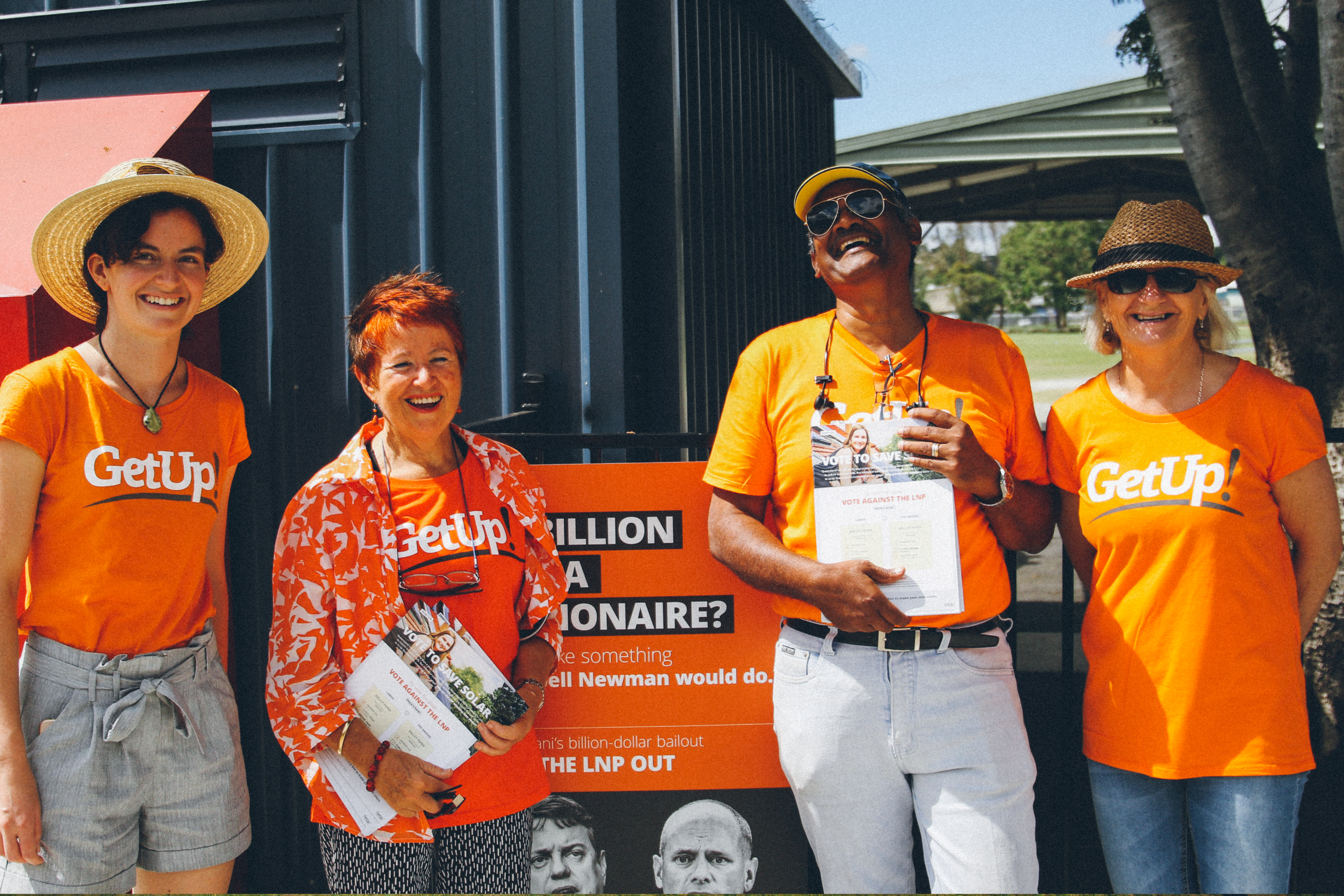 Vote on issues that matter this election

GetUp is an independent movement of everyday people.

In line with GetUp's issue-based independence, earlier this year the GetUp Strategy Team surveyed over 50 candidates and parties to ascertain their positions on 60 progressive policies. We combined their survey responses with insights from campaign partners and independent research to create GetUp's handy issue-based voting guides.

These voting guides are the cornerstone of GetUp's election day efforts that will see thousands of volunteers handing out at 380 booths across the country, from far north Queensland to northern Tasmania. Volunteers will be working hard in 29 electorates in six states and one territory, on 21 May.

Volunteer with GetUp on election day

GetUp’s independent voting guides provide voters with options on how to number their ballot for the best outcome on a given issue, such as more First Nations Justice, tackling rising inequality and real climate action.

In all strategic decisions, our guiding principle was to help GetUp members have the greatest electoral impact on the issues members care about most. That's why our voting guides recommend the candidates and parties with the strongest policies, who also have demonstrated community support.

Together with our policy survey, our voting guides encourage parties and candidates to take more progressive policy positions to the election on featured issues. Because it's not just about making our voices heard, it's about making them matter. 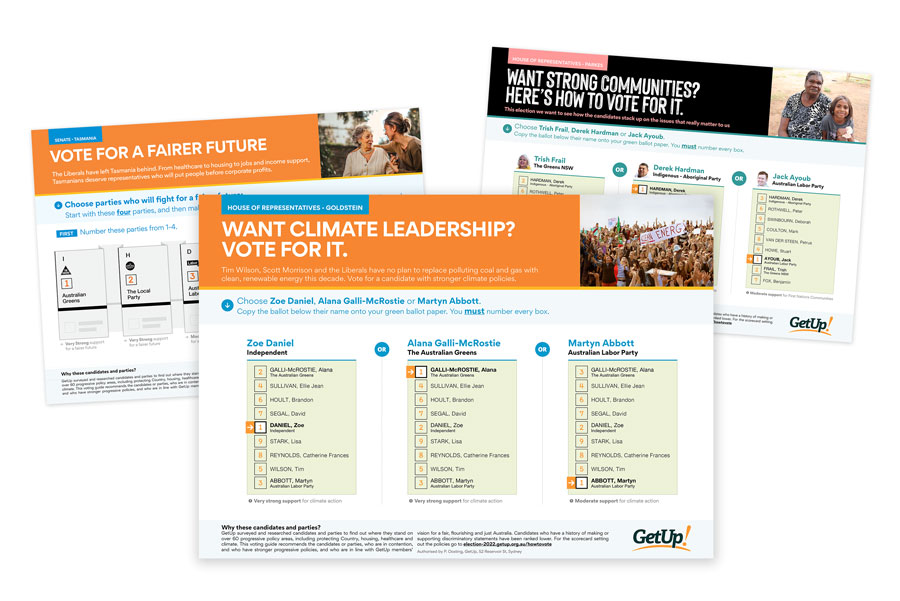 We don’t back candidates, we judge them on their policies. GetUp is campaigning on issues identified as top priorities by GetUp members, such as strong climate action and justice for First Nations communities. In line with this, we're giving people information about how to support the parties and candidates with the strongest public policy positions on these issues.

We endeavored to research and represent party and candidate policies accurately and fairly – however if you think you've spotted a mistake, please contact us at electionpolicysurvey@getup.org.au

It’s GetUp’s most ambitious Election Day effort yet, with thousands of volunteers at 380 polling booths across the country, from far north Queensland to northern Tasmania. Volunteers will be working hard in 29 electorates in six states and one territory, putting issues front and centre that are important to both GetUp members and voters in the local electorate.

Our independent voting guides show voters which candidates are committed to making real progress on our key issues, and who have demonstrated community support. The guides alway feature at least 2 candidates, and there can be up to 4, so voters can decide how to cast their vote on an issue that matters to them.

Unfortunately we can't be everywhere this election day. We’ll be in places where GetUp members can have the most significant impact on our priority issues.

We'll also be active in places with many GetUp members, to increase the chances that our issues become a deciding factor for voters, and so key decision makers take notice.

Keen to get involved? Sign up as an election day volunteer here

Live a long way from the action? There are still loads of other ways you can have impact. Email eday@getup.org.au to find out more.

We chose marginal seats, like Leichhardt and Lingiari, where the number of First Nations voters is larger than the margin the seat is held on, and we’ve been working alongside those communities for years.

We chose marginal seats, like Macquarie, Page, Eden-Monaro and Gilmore, who on the frontlines of the climate impacts - fires, floods and drought - and where climate action ranks as a top issue for voters to put climate change on voters’ radars at the polling booths. This is where we think we can get voters to shift their vote based on climate concerns.

We chose marginal seats where both Labor and Liberal incumbents are under pressure, such as Macquarie or Goldstein, where we think climate concerned voters can pressure these backbenchers to speak up for climate and influence the policies of their leaders, or seats, like Bass, Braddon and Lyons, where voters want action from both major parties to address rising inequality and cost of living.

This term of Parliament, GetUp members have been working hard to show politicians we need a fair, flourishing and just Australia.

It is clear that in this election, together we make the future.

Our how-to-vote cards feature our 2022 campaign priority issues of First Nations justice, climate action and tackling inequality, alongside other long-standing GetUp campaigns, like fighting for a federal anti-corruption commission.

When people vote on an issue it has a powerful impact on the election. It sends a strong message to the next government to deliver on the issues GetUp members care about.

It’s simple – candidates or parties who stacked up on the issues that matter to GetUp members, who have also demonstrated community support. Each how-to-vote card features at least two candidates, and many have up to three or four. It’s for voters to make the final decision on how to cast their vote.

GetUp independently researched parties and candidates across 60 different policy areas and assessed the strength of those policies. We also invited all major parties and candidates to respond to our party policy survey, offering them an opportunity to tell us their stance on a select range of policy areas. To decide the order of preferences, we prioritised parties/candidates whose policy platforms are broadly aligned with the GetUp movement's core values and policy priorities.

You can access a copy of the comprehensive policy questions we put to parties and candidates here.

We have done our best to provide a fair representation of party/candidate policies. If you think you've spotted a mistake, please contact us here

We don’t back candidates, we judge them on their policies. GetUp is campaigning on issues identified as top priorities by GetUp members, such as strong climate action and justice for First Nations communities. In line with this, we're giving people information about how to support the parties and candidates with the strongest public policy positions on these issues.

This is in line with GetUp’s commitment to political independence. We engage in elections because they are great change moments for our issues and provide the best opportunity to build a more fair, flourishing and just community for all. GetUp's political independence allows GetUp to work with, and critique, all political parties and candidates without fear or favour.

For more information you can check out GetUp’s statement of independence here: getup.org.au/about/getup-statement-of-independence

In February 2019, the Australian Electoral Commission deemed GetUp's how-to-vote cards consistent with our standing as an independent third party organisation.

The outcome of their review confirmed the independence of our 2016 election how-to-vote campaign, highlighting that our voting guides emphasise issues, rate candidates on issues, feature multiple candidates and that we never give or receive money in connection with any political party or candidate. Read more.

Join us on election day!

Put our issues front and centre on 21 May